My girlfriend watches the show Criminal Minds. I don’t know why. It’s a pile of trash and it escapes me as to how it’s managed to sustain such a long run. As far as the progression of television dramas go it’s a huge step backwards. However, it does have one saving grace. It often has decent music on it. I’ve been subjected to five minutes of it here and there while it’s been on and I’ve been in the same room. One of the characters listened to Elliot Smith, which was impressive. But a few weeks back I caught this guy:

It was a song called Great Big Bundle of Love. I liked it a lot, though the plot it was accompanying left a great deal to be desired. Still, every cloud has a silver lining, and sometimes you can polish a turd enough to find that under all that shit there just might be a decent song or two lurking.

Still, it’s not exactly difficult to accomplish the task of having a great show AND a great soundtrack. Oftentimes the two go hand in hand. True Detective had a fantastic soundtrack, from the opening credits to closing the first episode with the Black Angels’ Young Men Dead. And throughout its eight episode run there was The Melvins, the Wu Tang Clan, KRS-One, and Grinderman. Breaking Bad was the same – great soundtrack. El-P but in an appearance. Still I was always a little disappointed that they never used Methamphetamine Blues by Mark Lanegan.

Speaking of whom, I saw him play in Newcastle back in January and my review of his gig is available in the current issue of R2 magazine. Met him, too. You want proof, you say? 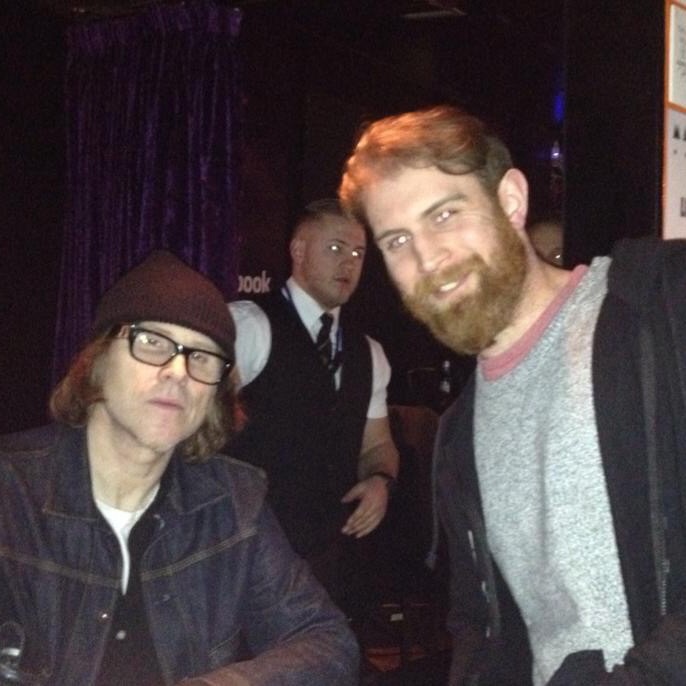 There we are, having a whale of a time together as he signs my ticket. As you can see, he was excited to meet me as I was to meet him – he was all like ‘OhmyGod, you’re Paul Heatley!’

In reality, he said three words, and with those three words he was everything I wanted him to be – gruff, taciturn, and cool as a muthafucka. His music has always been a huge influence on me, in my writing and in life, ever since I first heard Hit the City way back in 2003. I saw him play with the Gutter Twins down in Liverpool a few years back, and I thought that would have been the only opportunity I’d ever get, so I was pretty damn excited when he announced he’d be playing Newcastle to promote Phantom Radio. If you’ve never heard any of his stuff before I highly recommend him, he’s got a very distinct voice and tends to genre-hop a little, so chances are good there’s a little something for everyone.