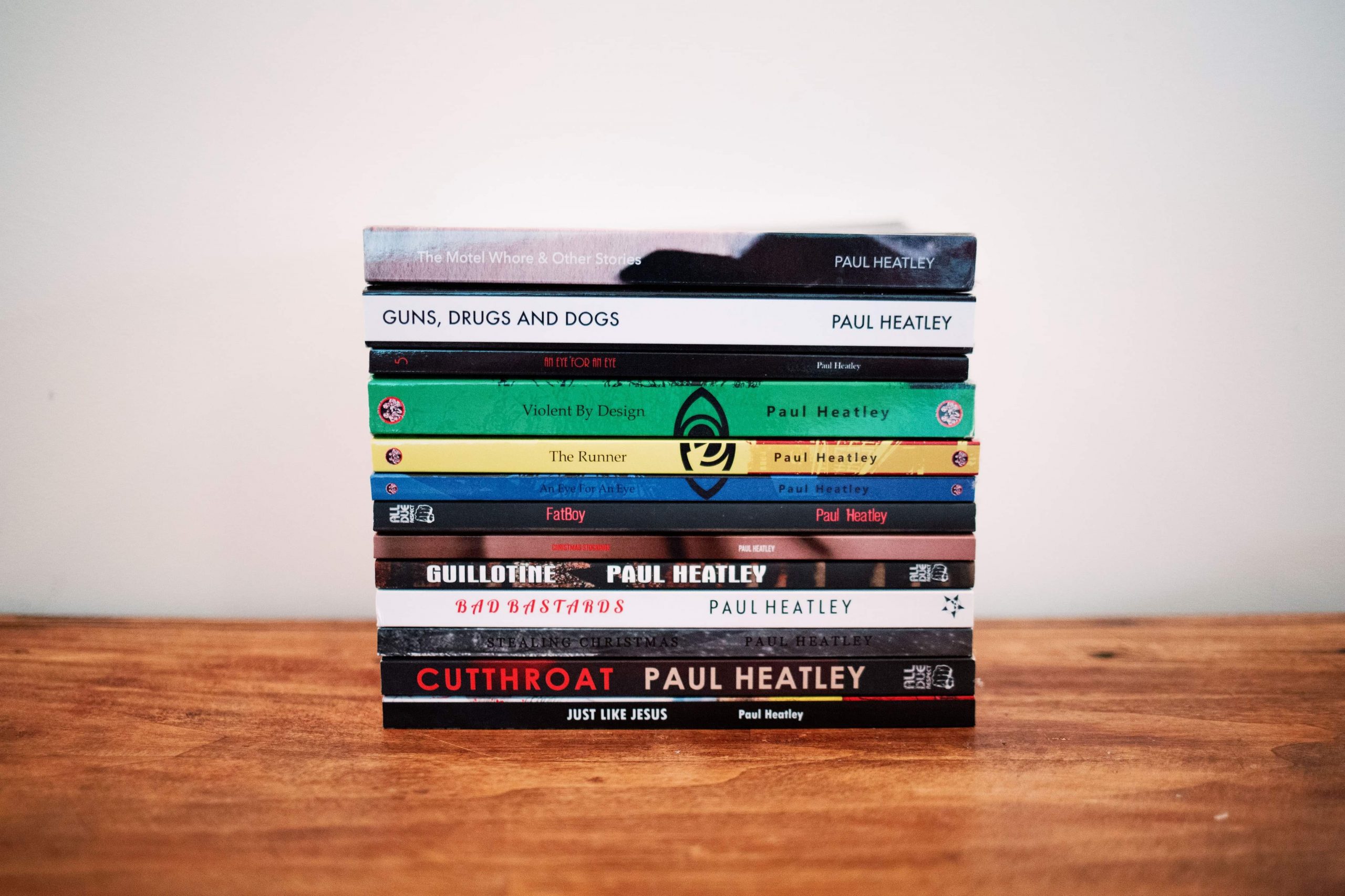 As you can see from the picture above, I’ve got twelve books out in print currently (thirteen in the shot, but two of them are the same book, just different editions). Here’s a rundown of them all so far, in (roughly) chronological order:

WARNING – CONTAINS STRONG LANGUAGE, SEXUAL CONTENT, AND SCENES OF VIOLENCE. SHOULD NOT BE READ BY ANYONE. A dying town on the edge of nowhere. Misfits, outcasts, losers and loners, making their way through their aimless lives. The Motel Whore. The Vampire. The Boy. They will crawl inside your skull. They will live beneath your skin. They will stay with you forever. Featuring two previously unpublished tales.

‘Darker than spilled blood, more twisted than a pile of mangled bodies, this is a memorable, evocative piece of work.’ – Tom Leins ‘

An enforcer. A fighter. A hitman. Three tales of outcast men living on the fringes of society. Dark lives shadowed by chaos and violence, betrayal and bloodshed. They may survive, but no one makes it out in one piece. Featuring the novellas The Mess, The Pitbull, and Three.

An eye for an eye makes the whole world blind.
When it comes to Neil Doyle’s daughter, Gandhi had no idea.
An accident leaves Jasmine Doyle permanently disfigured, and the patriarch of one of Newcastle’s crime families goes on the warpath to find the perpetrator. He doesn’t care who gets in his way, or what he has to do to them, to get his hands on the man responsible.
Graeme Taylor and ‘Tracksuit’ Tony Gordon find themselves dragged into this brutal quest for vengeance, pushed physically and mentally to the breaking point by all that they see, and all that they are forced to do.
By the end, the streets will run with blood, and no one walks away unscarred.

Davey Hoy’s money has gone missing. Jackson Stobbart thinks he knows where Cathy has run with it and he follows her north-east to their seaside home town. He’s hoping to get it back before anyone notices it’s gone. Unfortunately for him, Cathy has run to her ex-boyfriend to hide-out, and Jackson’s never been much of a fighter. However, if Jackson has to go through the ex-boyfriend to get it, well, he’d rather do that than tell Davey the truth.
Meanwhile, back in Newcastle, Davey has problems of his own. Desperate to prove himself to Michael Doyle, a man he despises, Davey has to try and keep his cool while dealing with people he knows to be lesser than himself. And that’s before he finds out that someone has done a runner with the money he’s been stealing from Doyle.

After a raid on one of Neil Doyle’s drug houses, his new right hand man Jimmy Finlay is determined to keep the news quiet from Neil and to deal with things himself. The person responsible, however, is not someone that can be dealt with quickly. He’s a dangerous man with a bad reputation. Things are primed to get bloody in Newcastle, and that’s the last thing Neil needs as he works on the unveiling of his brand new nightclub.

If Jimmy can’t get things under control, Neil’s going to have to turn to one of his firm’s old hands, Graeme Taylor. Trouble is, no one has seen or heard from Graeme in close to a year, save for his surrogate son Tracksuit Tony Gordon, and he’s not in any rush to give him away.

But there’s only one way things can be with men this violent by design.

After his girlfriend leaves and takes their young son with her, Joey Hidalgo is left alone in the trailer they formerly called home with nothing to do but get drunk and contemplate her reasons. Is he really as angry, as volatile, so close to constant violence, as she claims he is?

No, Joey thinks, of course not, the real problem is money—or lack thereof. Joey’s a bartender, always struggling to make ends meet, unlike his most vile regular customer, the rich and racist fatboy. So Joey hatches a plan to get his family back by taking him for all he’s worth.

But the fatboy isn’t going to make it easy for them. Neither is Joey’s temper. Things are going to get messy, and it’s gonna be one hell of a long night.

“This book is what noir is meant to be: dark, gritty, and no shots at redemption.”—Derrick Horodyski, Out Of The Gutter Online

“Fatboy is a fast, frenetic read from a writer at the top of his game.” — Gary Duncan, author of You’re Not Supposed to Cry

Twas the night before Christmas…

And Santa Claus is getting wasted…

Sophia is waiting for her husband to get home…

Beth is glad hers is gone…

It’s the night before Christmas, but there’s plenty stirring. There’s sex and there’s violence amongst these bad boys and girls, and if they’re not careful, they’re all likely to end up on the naughty list.

After suffering a lifetime of tyranny under her father’s oppressive rule, when Lou-Lou sees a chance to make a break with the man she loves, she takes it. Problem is, daddy’s also known as Big Bobby Joe, a dangerous and powerful man in the local area—powerful enough to put out a sixty grand bounty on the head of the man she’s run off with, who also happens to be one of his ex-employees.

With every criminal affiliate out looking for them, making good on their getaway doesn’t seem promising. Even their so-called friends are on the take, willing to pull a double-cross if that’s what’s going to turn them a quick buck. But Big Bobby Joe hasn’t counted on his daughter’s resolve to distance herself from him. No matter what he throws at her, no matter what he does, she’s going to get away—or die trying.

“A missing girl, a father who wants her back, a hitman. You think you know where this story is going, but in Paul Heatley’s masterful hands, Guillotine never takes the expected path. Full of crackling dialogue, characters whose actions surprise you at every turn, and an ending you’ll be thinking about for days after.” —Hector Acosta, author of Hardway

“Paul Heatley is one of the most compelling writers currently working in the UK.” —Tom Leins, author of Repetition Kills You

“Heatley has an adept ear, and he’s got the writer’s chops to translate what he hears.” —Matt Phillips, author of Accidental Outlaws

“Heatley has this genre down pat and few others can top his style. Step into the dark and enjoy the fun.” —Grady Harp, San Francisco Review of Books

Falling in love might just be the dumbest move Patton has ever made.

Tammy Dawson is beautiful – tall, with most of her length in her legs – and Patton has fallen head over heels. Tammy is also Bobby Hodge’s daughter and that means she’s off-limits to guys like Patton.

Bobby runs the Bad Bastards Motorcycle Club with an iron fist – he runs his family the same way – and when he finds out about Patton and his only daughter it was only ever going to go one way, badly.

Beaten to a pulp and under threat of death, Patton is determined to find a way to be with the girl he loves no matter what the cost, but as the stakes get higher he has to decide just how far he’s willing to go in the name of love.

“Heatley has an adept ear, and he’s got the writer’s chops to translate what he hears.” —Matt Phillips, author of Accidental Outlaws and Know Me From Smoke.

“Heatley has this genre down pat and few others can top his style. Step into the dark and enjoy the fun.” —Grady Harp, San Francisco Review of Books

“Heatley is becoming a master of American noir in the vein of Jim Thompson and James M. Cain.” – David Nemeth, Unlawful Acts

Life has been tough on Teddy Norton and Bud Corrigan. A pair of lifelong best friends and perennial losers, they’ve never had anyone but each other, and they’ve never had more than they could scrape together. Now it’s Christmas, and they want more than they’ve been given.Teddy’s good at breaking in. Bud’s good at lifting heavy things and doing what he’s told. They’ve got a list of houses they want to hit, of people they want to hurt the same way they’ve been hurt. They’re all at a party. Their homes are all empty…right? Stealing Christmas takes the villains from Home Alone, makes them the heroes, then throws them in a blender with Of Mice And Men and How The Grinch Stole Christmas.

Newcastle, 1978. John is sleeping with Mary. Mary is married to Daniel. Both men work for her father, the Top Man. Daniel is his son-in-law, next in line to take over his little empire. John is muscle. The Top Man orchestrates robberies—banks, pay rolls, anything that will bring in some easy money. When Daniel discovers his wife’s illicit liaison, he wants John dead. The Top Man signs off on it.

But John’s a man you only get one shot at. When Daniel happens to botch that one shot, then everyone involved needs to watch their back. Because John will be coming for them, and he won’t stop until he’s taken revenge on every last one involved in leaving him for dead.

“Paul Heatley remains a master of savagery, of bloody men and how they live, how they die, how they kill.” —Rob Pierce, author of Tommy Shakes

Ed and Dan are old friends. When Ed finds himself jobless and down on his luck, Dan is quick to offer him work. But Dan is a drug dealer, and now Ed is his driver.

Life is good, cruising the summer sun drenched roads of Northumberland, hooking up with girls.

That’s the lot, for now! See something you like just click one of the many links above. Enjoy!