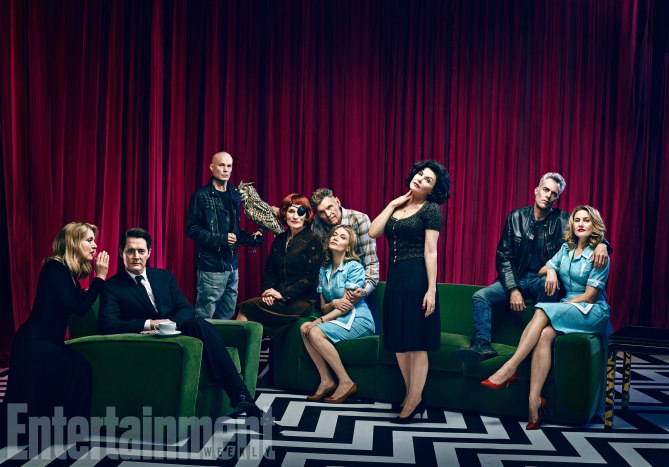 I haven’t waited twenty-five years for the conclusion of Twin Peaks, but the six years I did wait felt long enough. It’s with a mixture of excitement and worry that I’m counting down to the finale, as I think most fans probably are.

I was fifteen when I first heard of David Lynch. It was a Saturday night and Mulholland Drive was on the movie channels, so I gave it a try. It blew me away, I’d never seen anything like it. I saw Lost Highway and Blue Velvet soon after, and I read into Lynch and his works. Twin Peaks was mentioned with great regularity, so for my sixteenth birthday I got the first season box set.

Truth be told, I wasn’t really into it, with the exception of the dream sequence and the dancing dwarf. THAT one scene was the Lynch I was accustomed to from the three movies I’d seen. So I watched it through, right up to that cliffhanger ending, and then I moved on. I didn’t hunt out season two, though I recall seeing it once at the Metro Centre HMV.

Something about Twin Peaks stuck with me, though. I’d take that box set down off the shelf and think to myself how I should really revisit it, see if I could understand what exactly it was everyone was raving about. Maybe it was my love for Lynch’s work in general that kept my interest alive. Viewings of Wild At Heart, Inland Empire. Rewatching the dancing dwarf on YouTube. I reached twenty-two, going on twenty-three, and I suggested watching it to my then girlfriend. She agreed.

Holy fuck, it was like seeing it for the first time anew, and I GOT it. The unending wailing grief that opens the show, then the arrival of Special Agent Dale Cooper changing the whole tone. The quirky characters. The Log Lady. AUDREY…

I dont think my girlfriend was into it as much as I was. I think she feigned interest, probably to keep me quiet, but whatever. I was engrossed.

It was as if I’d never seen it before. It was fresh and new and exciting to my eyes and ears, and I promptly ordered season two, and Fire Walk With Me. I knew it ended on a cliffhanger, I knew it would likely never be resolved, but I didn’t care. I was engrossed. I was entranced by silent drapes, by Project Blue Book, transvestite David Duchovny, the resolution of Laura’s killer. The terrifying final episode with Cooper fleeing through the Black Lodge, pursued by his doppelgänger (Where’s Annie??). Oh, and Audrey. Audrey kept me very interested, didn’t matter how much or how little she was doing (unless Bily Zane was also onscreen…)

So the show ended, and there was much sadness for me, but there was the small glimmer of hope that was Fire Walk With Me. I’d read that, although it was a prequel, there were elements of a sequel to it.

What I remember most about Fire Walk With Me, was how I felt when it ended. It was a greater sadness, that the journey of these characters, their story, had ended, and without proper resolution. There would be no return to Twin Peaks.

Then, a few years down the line and with a son who I’d one day introduce to Cooper’s coffee-love, Audrey’s dancing, and Cole’s deaf bellowing, the teaser dropped. Laura Palmer, clicking her fingers. Then the date.

What was that, a year and a half ago? Two years? The first episode of the return aired and I woke at five in the morning, I was so fucking excited. I suffered for it, but what did that matter? Twin Peaks was back!

And it’s been pure David Lynch. It’s confounded all expectations, done entirely its own thing. I’d be a liar if I said I was happy with everything that has occurred – Lynch has no interest in telling the story we wanted told – but by and large it’s blown me away, it’s been a masterpiece. The nuclear bomb episode will go down as one of the greatest pieces of television of all time. The last episode, the Audrey twist at the end, the return of Dale Cooper, it fills me with hope for this finale, that it will cement the Twin Peaks return as one of the most important events in both television and storytelling.

Anyway, I’m really excited to see how it all ends, and what mysteries will remain unresolved. Only a few hours left to go!