An Eye For An Eye Series

So, I may not have been particularly busy on here, but I’ve been preeeeeety busy in the outside world!

You may remember my book An Eye For An Eye, published by Near To The Knuckle (who are now going by Close To The Bone), well, it’s now a series of three books! An Eye For An Eye has a new front cover to go with its two new brothers – The Runner, which is a standalone tale featuring appearances from characters in the original story, and Violent By Design is the sequel proper to Eye. All three feature the exploits of the Doyle family, a crime organisation based in Newcastle-Upon-Tyne in the north east of England.

Theyre fast, they’re violent, and they’re filled with heart! One reviewer has described them as a cross between Brit Grit and Kitchen Sink Drama, which I’m pretty pleased with. As far as my own influences go, if you’re a fan of Get Carter, Chester Himes, or, to a lesser extent, James Ellroy, maybe you’ll find these bad motherfuckers up your alley. I’ve put a link below that’ll take you to the Eye For An Eye paperback at Amazon, where you’ll easily find the other two in the series, too. Also, you can find images below of how beautiful the three look together – three covers and the spines! I think you’ll find the spines particularly special!

Anyway, if you find yourself interested enough to give the link below a click and then to give them a read, I hope you enjoy! 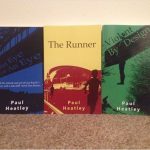 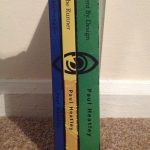